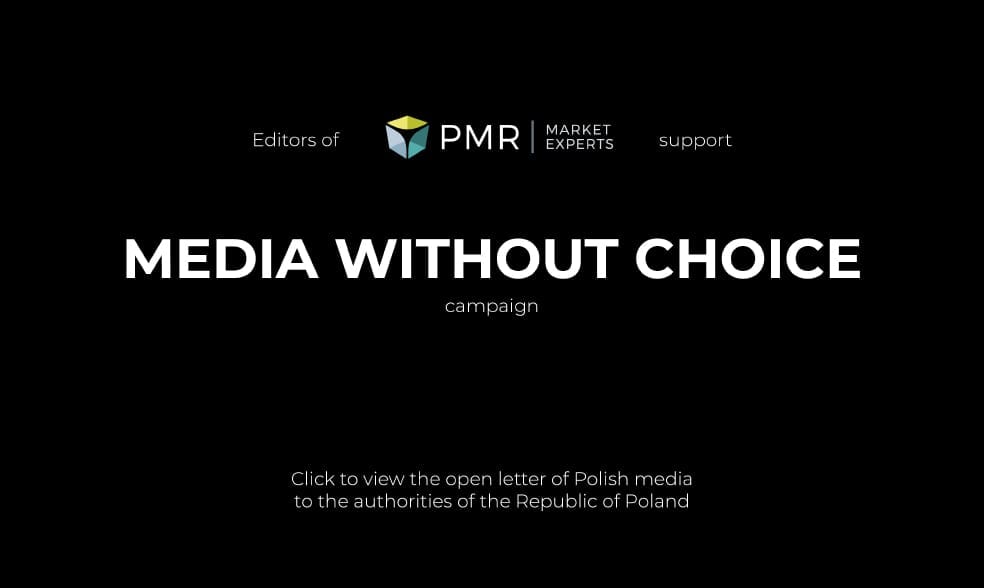 As part of the “Media without Choice” campaign, Polish media have published an open letter to the authorities opposing the introduction of a new tax, referred to as the media tax. The charge on internet advertising is to amount to 5% of a tax base, while the tax base will be calculated considering the number of recipients of internet advertisements of a given service provider in Poland. Editors of PMR Market Experts support this campaign.

We would like to address the announced new additional tax burden on the media operating on the Polish market, misleadingly called the “contribution”, introduced on the pretext of COVID-19 epidemic.

It is simply a levy that affects Polish viewers, listeners, readers and internet users, as well as Polish producers, culture, entertainment, sports and media.

The imposed tax will mean:

The asymmetrical and selective charging of individual companies is also scandalous. In addition, an attempt to change licence conditions during the period in which they are in force is unacceptable under the rule of law.

As media operating in Poland for many years, we have not evaded our duties and social responsibility. Every year, we pay an increasing number of taxes, levies and charges to the state budget (CIT, VAT, broadcasting fees, fees for copyright management organisations, fees and charges on licences, frequencies and related allocation decisions, VOD content, etc.). We also support the most vulnerable groups in the society with our charitable activities. We support the Polish society and the government in counteracting the epidemic, both by providing information and by allocating resources worth hundreds of millions zlotys for this purpose.

Therefore, we firmly oppose the use of the epidemic as an excuse to introduce yet another extremely severe burden for the media. Moreover, this tax will be permanent and will outlast COVID-19.

Facebook Twitter LinkedIn According to a study commissioned by the Office of Electronic Communications, as many as 73% of people…

Facebook Twitter LinkedIn The nationwide telecommunications conference returns to Cracow! Among the novelties there is a Cloud path, a track…

Facebook Twitter LinkedIn It took about a year to find a buyer for Onet data centre in Krakow. Ringier Axel…

Facebook Twitter LinkedIn At the end of November 2020. The Office of Electronic Communications informed about the newly available version…

Facebook Twitter LinkedIn In March 2021, Netflix returned to the position of the most popular streaming service in Poland. He…